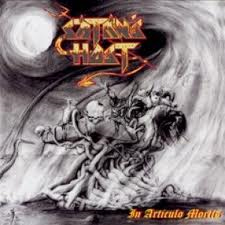 1. Thou Evocation of Bartzabel
2. Cauldron of the Ancients
3. Forbidden Grounds
4. W.A.R.
5. Near Death: Experienced
6. Mystical Millennia

One of the most favorite evil groups of the American social matrix P.M.R.C., Satan´s Host, had long developed their diabolic and hostile Death Metal since the band´s first guitar chords were churned out from the carbon-black pits of Hell to the daylight back in 1977 (yes, Satan´s Host has existed nearly 30 years already, believe it or not – although not even the members of the band always knew that accurately whether the band was existing and torturing all the Christian communities by their unholy, satanic existence, or whether the band was put on ice for good ). Anyways, Satan´s Host did sound a quite different band on IN ARTICULO MORTIS than they did on their debut record METAL FROM HELL which many still consider one of the finest underground metal albums recorded ever (don´t even try to temp me to hunt down the original copy of METAL FROM HELL from somewhere – I´m not one of those people, their pockets filled up with extra cash!), and actually, I clearly do understand why as a matter of speaking.

So, this 5-song offering from IN ARTICULO MORTIS is basically some sort of a Death Metal manifest of Satan´s Host in which most of the songs are dominated by coffin-heavy yet very harmonious, chunky riffs that are not that far removed from the similar stuff that another legendary corpse grinder, Autopsy, churned out on their couple of 1st two albums. However, in contrast to slower parts, Satan´s Host has also got this nicely fitting speed element in their sound on IN ARTICULO MORTIS, too, which brings a bit more variety for the wholeness. The last song on I.A.M., titled "Mystical Millenia", is where all the fury is unleashed, nearly reaching even kinda chaotic, untamed musical fields for tiny, passing moments.

However, if something should need to be reproached on this release for, the production ain´t on that top-notch level; especially the drum sound has suffered from a relatively thin sound which brings down a bit the album´s overall strong musical impact on listeners. A bit heavier drum sound would surely have increased the killing value of this release for sure, but on the other hand, why should underground old school Death Metal always sound that over-polished or over-produced? It shouldn´t, I think. Oh, and a bit more powers to the guitar sound shouldn´t have done any harm to this release either, I guess.

There´s no question IN ARTICULO MORTIS should appeal many old school Death Metal fans out there, so go and get this album for yourself, and become a slave on the carbon-black altar of Satan´s Host forever.