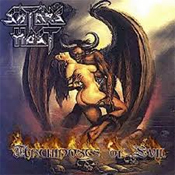 Satan´s Host 3rd full-length album titled ARCHIDOXES OF EVIL that was recorded in the winter of 2000, and released a bit later in the very same year by the band as a CD-R format only, has finally been released properly via Black Magick Inc. How these mysterious and evil priests from Hell sounded before the change of the new Millenium, don´t differ that drastically musically from the albums what they recorded after these unholy sessions, as one might think. The satanic majesties of Satan´s Host blended together incredibly well elements from almost every metal genre back in the day; an untamed aggression of Thrash Metal, corpse-heaviness of Death Metal (the slower parts in "Spheric Destiny" oddly remind quite much of Autopsy), evilness of Black Metal added with some necessary harmonies and melodies from pure Heavy Metal... and voila! There it is, a highly secret, satanic recipe of Satan´s Host that hasn´t been capable of copy-pasting by any band by this very day.

ARCHIDOXES OF EVIL is basically Patrick Evil´s ´one-man-show´ alone to prove what he´s capable of. Namely he has done all guitars, leads, harmonies and acoustic parts for the album, and damn, it´s not exaggerating to say the man´s got an extraordinary sharp pair of ears for the band´s overall magickal song writing process. Each song is served well by a demonically powerful atmosphere that surrounds a listener right after he/she has dared to step into the darkened world of these wizards from Hell, and it´s guaranteed there´s no backdoor to escape right after one has entered through those gates of Satan´s Host´s untold, musical magick. The band´s vocalist and exclusive possessor of satanic verses L.F.C. Eli Elixir sounds like he could slave Christians simply by using his bestial voice – full of pure evilness, and I guess that´s exactly what he does in the real life, too.

Nevertheless, Satan´s Host draws its influences from both 80´s - and ´90s Thrash/Death/Black Metal scenes on ARCHIDOXES OF EVIL; wrapping their sound up with deeply satanic themes and making their own magick nearly impossible to resist. They managed to slave me easily by their utterly evil, satanic magick - and it´s already been told that you will be on their "The Crucified Ones" -list next. Hail Satan... 666 unto the Legions worldwide!